It has been years since I have updated my views on Nifty through this blog. In the past four years things have changed dramatically, especially for the stock market. Nifty which had been struck in a range, have broken out and had witnessed a steady rally since then. For this reason, even before I start blogging Nifty daily updates, let me update you on the longer term view and intermediate view on it. Along with Nifty updates, starting next month, I will also start sharing my views on stocks, currencies and commodities. 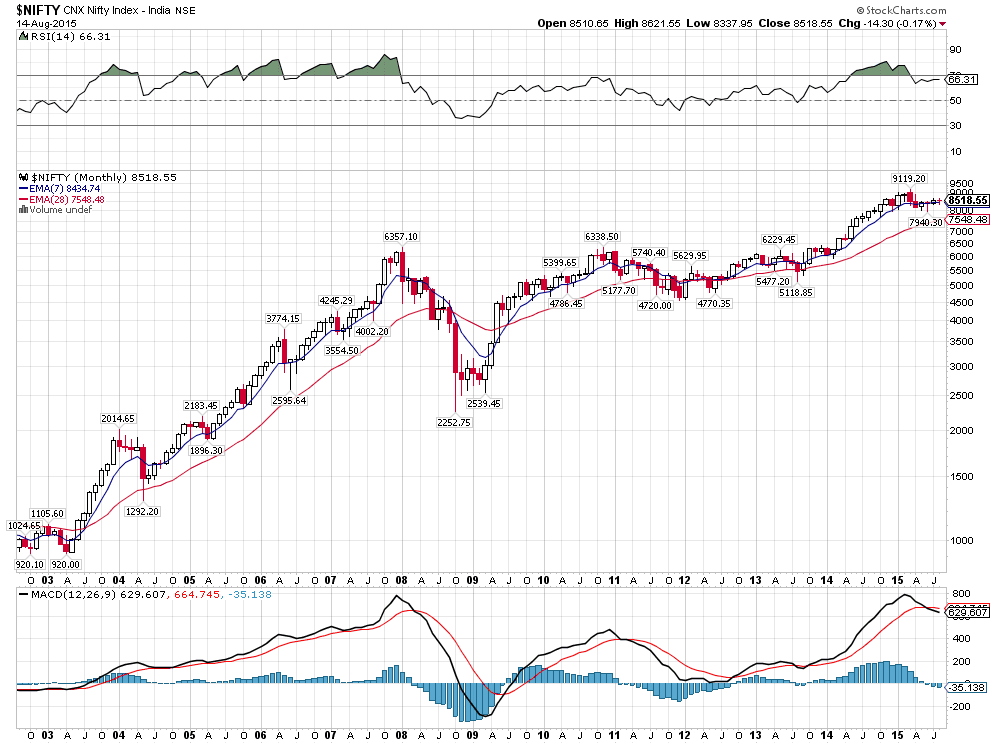 Let’s look at the Nifty’s monthly chart to understand the long term outlook. Many technical analyst consider December 2013 as a break out month, but for me it’s month of September when things (especially technical indicators that I look out for) have started moving on the positive note. Ever since September 2013 when this current rally began, Nifty had been making impressive moves favouring the bulls. The multi month Bull Run have gained momentum with each passing year. Technically speaking, the multi month Bull Run is far from over, rather I would say we have just began and have many more legs to witness in this rally. Looking at the chart closely and especially looking at the technical indicators, RSI and MACD it’s evident how things have started to cool off in the past six months, i.e. we have entered into a correction phase. This marks the first correction phase post the technical breakout that we have seen in September 2013. The question remains unanswered, is the correction over? Well this question would have be backed by the up move that we have witnessed in Nifty from 7940 levels. To answer this question, we need to go and look at the Nifty chart with lesser time frames like Weekly and Daily chart. However, am going to make this blog more curious and wanted to share knowledge rather than giving you answers (that one number called target) all the time. So, this would be the topic for blogging tomorrow.

One definite thing to carry today: Nifty’s multi month Bull Run has begun and has more legs to come. If you are a long term investor, forget about the correction that we are witnessing for past six months and stay invested as a part of your wealth creation.

For tomorrow: Is the correction over? What are the key levels to watch out for?

Popular posts from this blog

July 10, 2016
Now you can follow me on http://pathiyilsoutlook.blogspot.com Praveen Pathiyil
2 comments
Read more

An in-depth analysis on Nifty

October 01, 2015
Bottom Line : We are in last leg of the first correction of our multi month Bull Run. We will not enter Bear trajectory until Nifty breaches and close below 6580 for three consecutive days. Good Morning! Just now the DOW closed, closed with big gains however closed this quarter on a losing streak. As some of you know, I analyse and trade DOW more than any other market. Let’s get into business. Am going to keep this post a bit longer. As we move towards a longer weekend, let us do the analysis bit deeper. Am going to take you through how a real analyst go through a chart with minute observations to arrive at some conclusion. It would be boring for some who doesn’t want to learn how to make money. It’s going to interesting for those who want to understand how a technical analyst observes a chart.   Firstly, let us pull up the longer term picture of Nifty – the monthly chart. Nifty – Monthly We can easily identify the long term upward sloping trend-line
10 comments
Read more