What next for Bank Nifty?

Posted by Praveen Pathiyil at 16:44 3 comments:

Will this rally fill the gaps?

Bottom Line: We are in last leg of the first correction of our multi month Bull Run. We will not enter Bear trajectory until Nifty breaches and close below 6580 for three consecutive days.

Mr. Market loves to play fool around with Bulls Bears and all analysts. This is what we stated last week and here he goes. Now Nifty is marching towards filing up the hard gap that we have witnessed in the month of August. What next?

Even before we discuss what next, I wanted to discuss something i think is more important to read before analyzing markets. The topic for discussion is "Looking at the chart at different angles (time frame) ". Someone asked me this over the weekend, what would be done if different time frames gives different outlook. A very good question, I said now you have started to learn analyzing markets. Why? Unless a person looks at the chart in different time frames he is not going to understand what is happening or rather understand what is going to happen in the coming sessions. Contradictions on the outlook looking at different time frames would be there and it has to be there. It is the duty of analysts to synthesis the chart in totality after considering all possible angles.

A minimum of 3 different angles needs to be looked into always, then needs to synthesis even before jumping into any conclusion. Let's say I look into monthly, weekly and daily chart. Consider it is like film. The Monthly chart gives me the main picture. The weekly chart is something like reading a plot or looking to the film review or ratings. And the daily chart is like a trailer. Obviously, can you conclude saying a film is good or bad purely based on looking at a trailer? No, similarly the case goes with film reviews or reading the plot. The plot might be more or less with most of the other films, however if we need to conclude saying a film is good or bad, we need to see the film completely. That is why a monthly chart acts as an important chart than in any other to understand in totality. Similarly the daily charts as this chart summarizes the entire day's event. It acts as an engine as to whether you want to look into a film or not.

So that was a little story. Now back to business. Nifty daily chart has turned neutral from negative. Intermediary (Weekly) chart still remains neutral while Monthly (Main Picture) chart still remains bearish. Nifty can march ahead in filling up the gaps even before turning down. With no signs of turning up in monthly chart, it would be hard to believe the correction that we are witnessing would be far from over.

Stay tuned am updating the charts.

Email ThisBlogThis!Share to TwitterShare to FacebookShare to Pinterest
Labels: Nifty

An in-depth analysis on Nifty

Bottom Line: We are in last leg of the first correction of our multi month Bull Run. We will not enter Bear trajectory until Nifty breaches and close below 6580 for three consecutive days.

Just now the DOW closed, closed with big gains however closed this quarter on a losing streak. As some of you know, I analyse and trade DOW more than any other market.

Let’s get into business. Am going to keep this post a bit longer. As we move towards a longer weekend, let us do the analysis bit deeper. Am going to take you through how a real analyst go through a chart with minute observations to arrive at some conclusion. It would be boring for some who doesn’t want to learn how to make money. It’s going to interesting for those who want to understand how a technical analyst observes a chart.

Firstly, let us pull up the longer term picture of Nifty – the monthly chart. 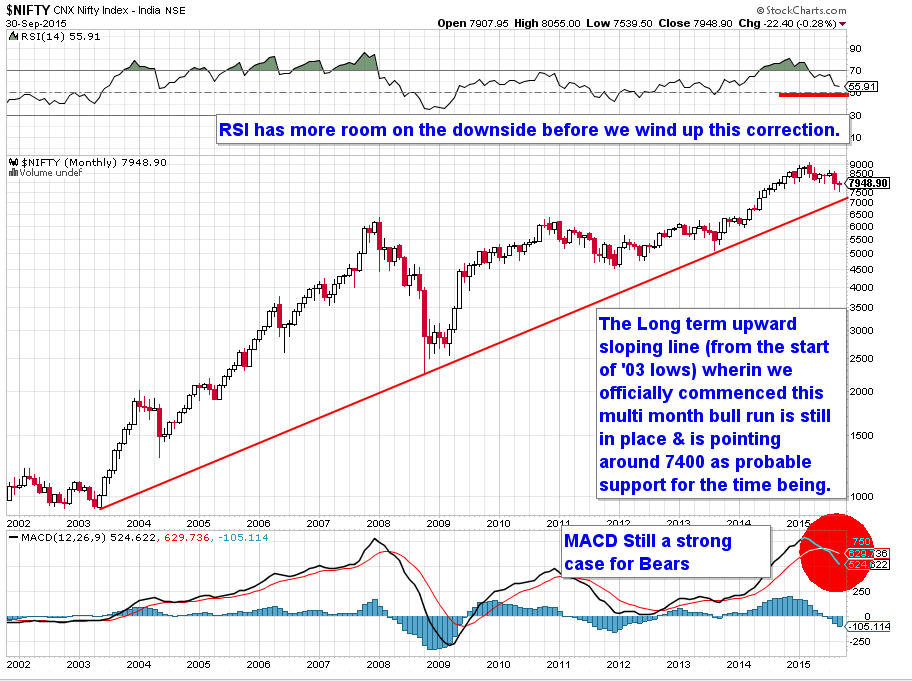 We can easily identify the long term upward sloping trend-line still in place. This indicates Nifty has more room on the downside and currently we are heading towards 7400 mark if we have to believe this long term trend-line is to hold. If we drag in terms of time correction, we might see this 7400 mark moving towards 7450 or 7500, let us not speculate right now on where this correction could end up. 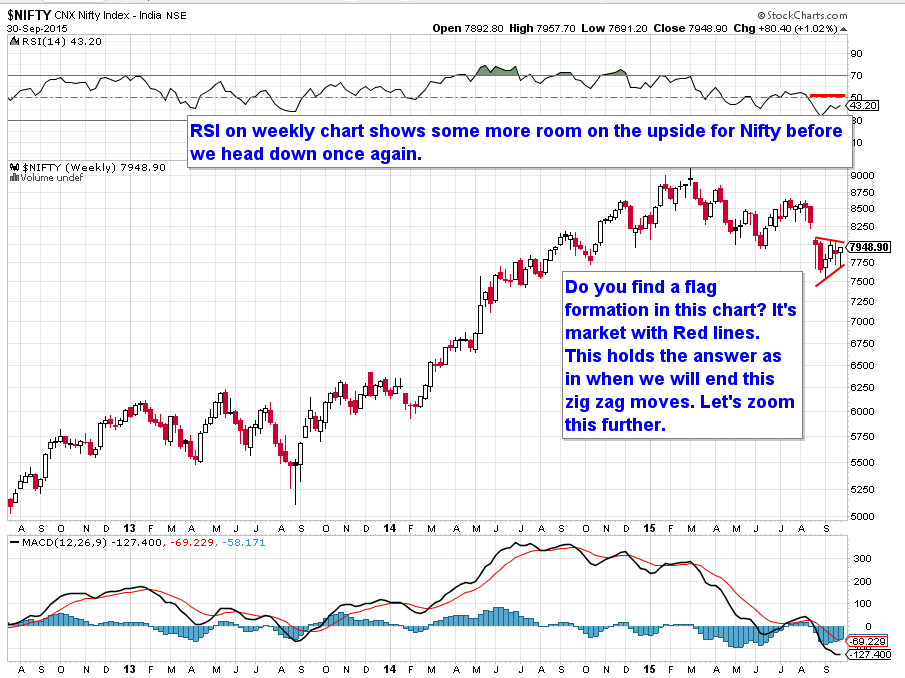 Now let us move to intermediate view on Nifty. Let’s pull the weekly chart. The zig zag zone that we believed till yesterday was a rectangle, you can find it in the posts below. Now observing this chart closely, we find it to be a perfect flag pattern in formation. RSI still has more room before turning down from in between 50 and 55 mark. Let us zoom this picture closely as to understand when will this zig zag zone comes to an end. 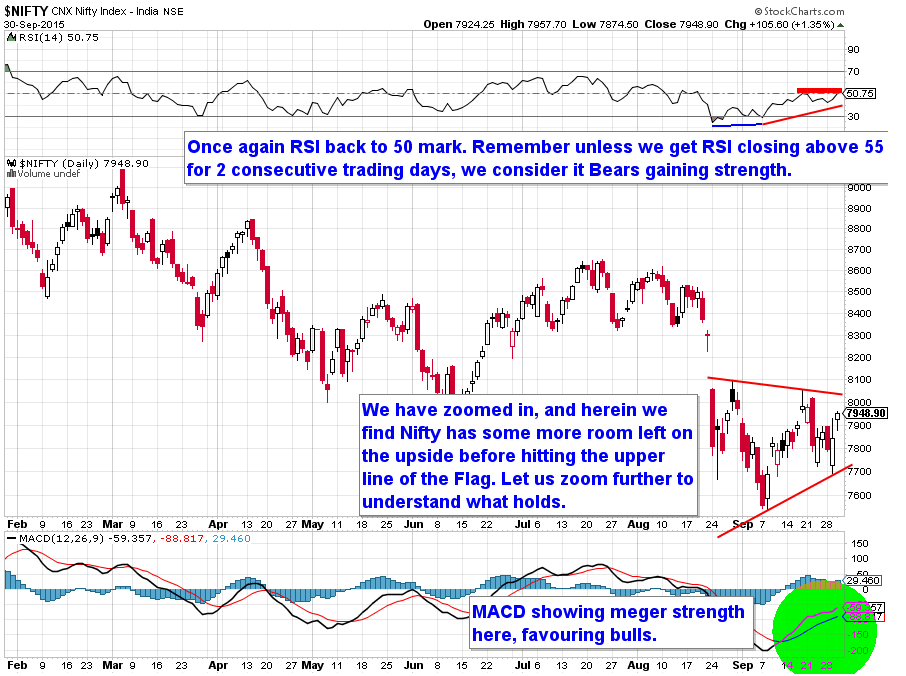 Looking at the daily chart for a closer observation. Now this gives us few cues.


Now the question comes, if we are heading towards the close of zig zag zone; what next. Is it on the upside or downside. Can you see something different on the RSI chart? This holds the answer to our question. Let us dig the chart further down trying to answer our question. 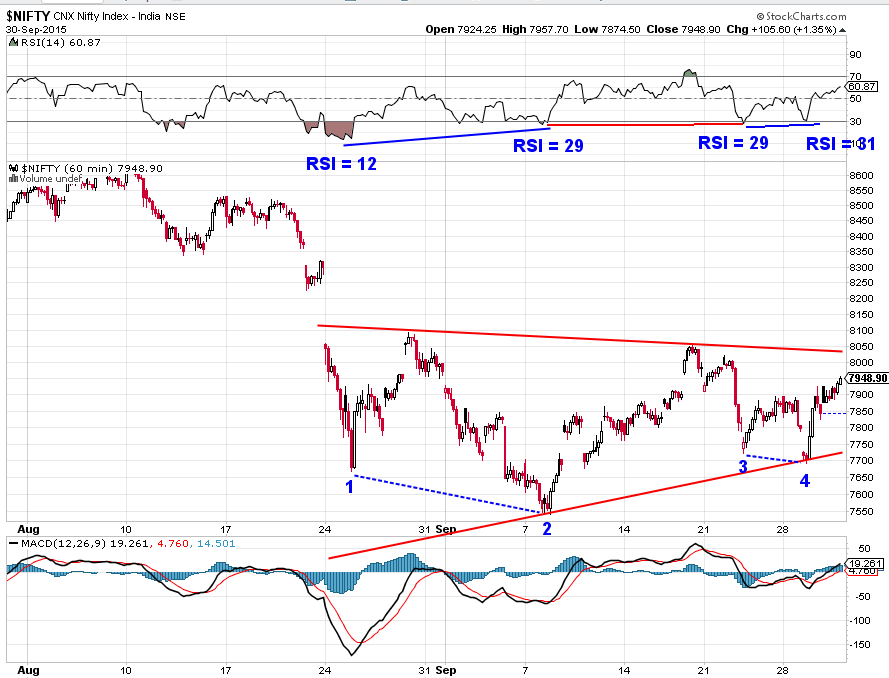 Pulling up the hourly chart. We can now clearly see the zig zag zone (flag) on zoomed version. Now as we discussed earlier RSI on the daily chart hold the answer and this is why we have zoomed in. I have marked 4 points on the price chart. Three different lines have also been marked on the RSI indicator. Let us understand if there was any positive instances in the chart to indicate the next move up.


This shows though prices were hurrily moving up, it did not move on the basis of inherent strength of Bulls rather it moved up because Bears stayed away just to gain more strength to push prices lower once zig zag zone ends. 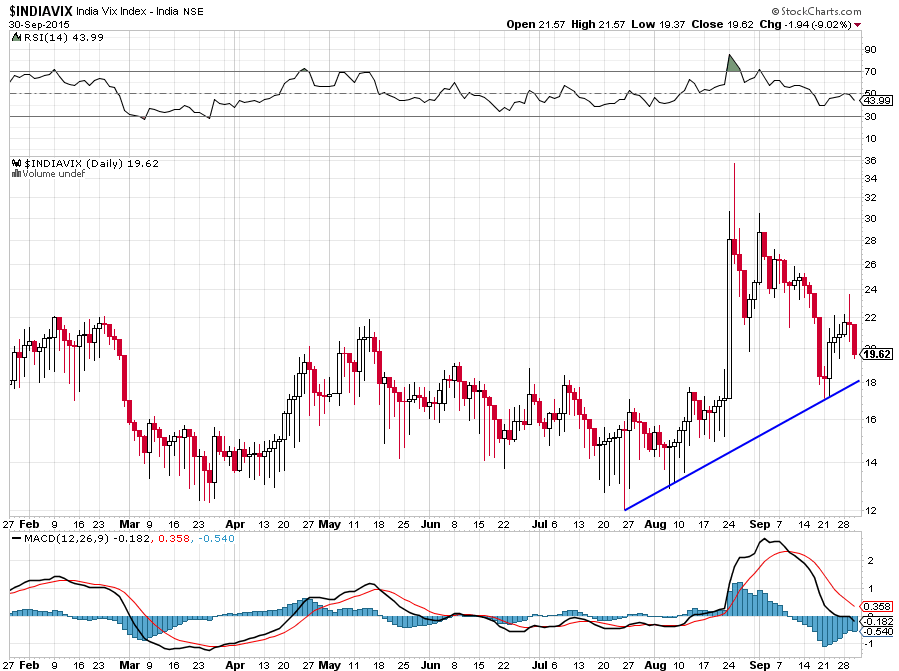 Finally let us pull India VIX (Volatility Index) chart. This will give us cues as in are we going to see an end to this zig zag zone in next two trading session or not. I have always observed, there is a negative correlation (most of the time) between price chart and VIX chart. So let us try to understand.

Looking at the chart we see an upward sloping line which acts as a trigger to plug in volatility in the markets. To be exact right now it hovers around VIX-18 and once this 18 mark is touched we might see another round of volatility creeping into the market, moving towards 40 mark which means (negative correlation) nifty moving towards 7400 mark.

Conclusion: Today watch out for Nifty @ 8040 + India VIX @ 18. If this combination happens either today or Monday, we might see the next round of selling coming in. Alternative view: If we close above 8050 or India VIX closes below 18, we might see the gap @ 8360 filled up before we head down. Why am I saying this alternate view is simple? We are in a correction zone and always Mr. Market loves to play fool around bulls and the bears.

Caveat: It’s only Mr. Market who is always right, not the Bulls, nor the Bears or the analysts. Mr. Market rewards only those who understands this and who follows him rather than trying to beat him.